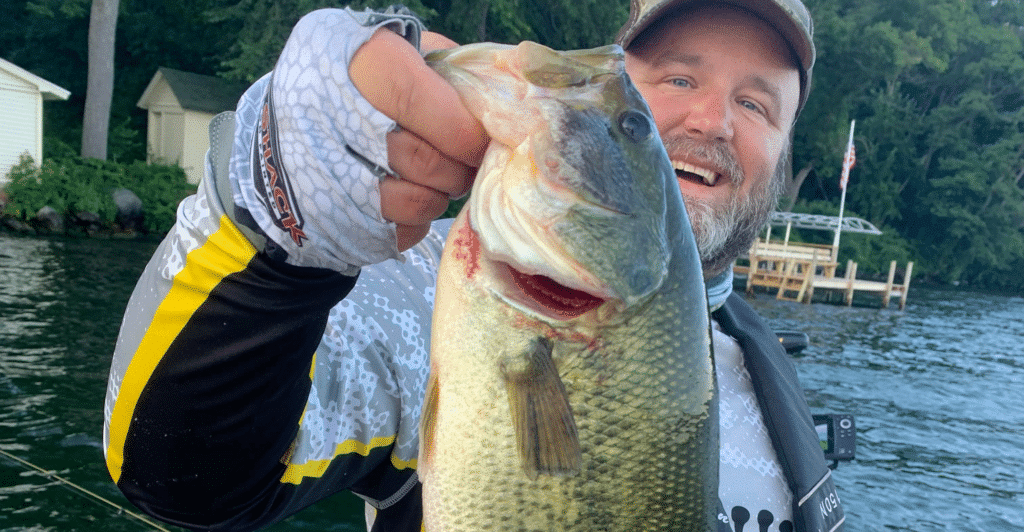 Bass league returned to Big Green lake this week. And boy what an interesting night.  The high winds from the SW were going the length of the lake. When you take that into account with the deep water (200’+) you get some big Lake Michigan sized waves.  I was very happy to have my old 89′ Yar-craft with it’s deep V.  As long as we were smart about it were were fine.  Those waves gave pause to most of the guys in bass boats… and with good reason.  It was very gnarly out there until around 7:30 when the winds started to die down.  Made for a bumpy ride… but also played to our advantage.  Yes, we have the slowest boat, but we were also one of the only ones who braved the waves to get to the rocky shorelines we wanted to fish. Since we were 6′-12′ water, with rock/gravel mix with waves coming in we expected a more active bite. Conditions like we had oxygenate the water, move and confuse baitfish, and can turn into a feeding frenzy for predator fish as they head shallow to chase the baitfish that are pushed up against drop offs or the shoreline. We couldn’t fish the original spot I wanted to hit (Thank you Bobby Lane) due to the waves at the start were making boat control very difficult and un-safe (see the video above). So we headed to another spot I know well (same spot Brent Ehler was working for part of the Stage 8 MLF Championship) just outside of Norwegian Bay.  We found another boat from league fishing the exact spot I wanted to try so we headed a good ways further towards the bay working a rocky shoreline and drop off.   We marked fish, but they just wouldn’t hit.  The other league boat caught 3 in the time we were there (more on that later).

About 7:30 the wind died down so we headed back to our original location along the northern shoreline of Malcolm bay.  I switched over to a drop shot tipped with a Berkely Powerbait MAxScent Flat Worm in natural shad color.  We started just within casting distance of the docks. I made my second cast, turned away to get something and boom, I had a nice pre-spawn 3+’ lb largemouth on the line.  (Yes, I said pre-spawn. It was July 10th…and this bass just now ready to drop eggs. Big Green, due to it’s depth, usually has a late spawn, but the late cool spring seems to have pushed some to spawn very late this year.)

The fish hit when I stopped moving the bait. Ryan shortly after caught a nice one too to give us 2 fish to weigh in. His also hit when he stopped moving the bait.  AH ha!  We have a pattern. The fish WOULD NOT hit a moving bait. At all.  If we just let the bait sit, they would hit it. If it was moving, not a chance.  Not at all what you would expect for high 70 degree water on a windy day.  I also had a few nice bites on a neko rigged Yamamoto Senko in Goby color. We finished the day with 5.82 oz between 2 fish.  Not great, but good enough for 4th place.  The 3rd place angler (who just edged us out) was the one fishing outside of Norwegian Bay near us. I asked him what he was throwing since he caught 3 while we managed zero in that area. He was throwing a jerkbait… and by accident discovered a similar pattern. The bass would only hit his jerk bait if he let it site for 5-10 seconds. The pattern didn’t make sense considering the conditions, but it worked out in the end.