I tackled the same lake in the Shawano area as last week.  Again my quarry was bluegill to start, followed with a bit of bass fishing.  Again the same bluegill pattern held… however the conditions had changed greatly with cooler fall weather.  After my limit of gills was filled out, I did a bit of bass fishing and caught my largest one this year.  All in all it was a fantastic fishing weekend.

9+” bull bluegill, released. Please remember to release the largest gills in a body of water and keep the smaller 6″-8″ ones for eating.

It’s amazing what the first week of colder evenings in fall can do.  There was a distinct browning of weeds in the past week.  It’s looking to be an early fall at this rate.  The bluegills where however holding to the same pattern as a week prior.  The thermocline was still around 22′. I targeted the same deep flats in 15′-22′.  The bluegills were still on schools all over the lake.  When I found a school with my electronics I would spot lock and drop a panfish worm on a #6 long shank hook under a small slip bobber down to the fish.  Usually I would get a strike within the first minute or so.  If the fish were big, I would pull up 2 or 3 before the school roamed on.  When the school moved on, I would fire up my trolling motor and start going in an ever wider spiral out from where I was spot locked until I marked another school.  Hopefully it was the same school of larger fish.  If I started pulled up small ones, I just repeated the process until I located a school of larger fish.  I had my limit of gills both days within a few hours. 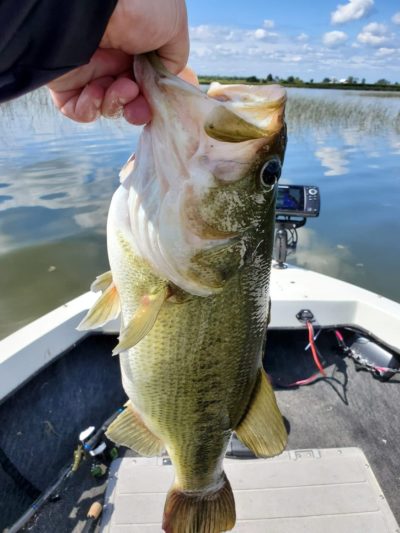 5 lb 9 oz Bass on a chatterbait

On Sunday, after catching my limit of gills,  I had a small window to go largemouth bass fishing.  I started along the deeper weed edge near the flats I was targeting gills on. The deeper weeds were still green, but the bass where nowhere to be found.  As I worked my way towards the shallows, I started hearing splashing closer to shore beyond a line of thick reeds and wild rice.  Not the easiest spot to get to, but thanks to my Minn Kota Terrova 112 with Ninja Grass Blade, I was able to get my boat through them into where I heard the fish.

Reeds, cattails, and wild-rice were prevalent closer to shore, but most of the rest of the weeds were already dying off.   I positioned my boat in the open water by shore and started casting along the reed edges and into any open channels in the reeds and rice that I could fine.  I started with swim jigs, but soon switched to a chatterbait and started getting strikes.  With the lower water clarity and standing reeds, I don’t think the bass could locate and home in on the swim jig well. The vibration of the chatterbait can be hear and felt from a long way.

When I would get a hit, it was like a freight train.  My final fish was one to remember. I heard a splash near where I was casting and moved my boat closer.  On the second cast she slammed it and went immediately airborne. I got a real good look as she was in the air.  I’m sure my jaw dropped as my heart rate spiked.   She was a tank.  After a long drag pulling battle, I worked her in and finally lipped the bass into the boat.  21″ largemouth bass weighing in at 5 lbs, 9 oz.  My best one this year!

Nothing is like a big fish. I don’t care if you are a muskie, walleye, or bass fisherman. When you land a lunker, it’s the best feeling on earth!

Another good fishing weekend.  We are now entering one of my favorite fishing times of the year. The pleasure boaters are becoming less and less and so are the fisherman as many turn their eyes towards hunting season.  Often I have the lake all to myself. The fish all start feeding up ahead of the winter…and they start schooling up.  So when you find the fish, you can catch a lot quickly.

I also got a new GoPro and mounts for my boat. I’m working on taking more and better videos.  Once I get the hang of it, I’ll be focusing more on instructional/how-to videos vs fishing reports. 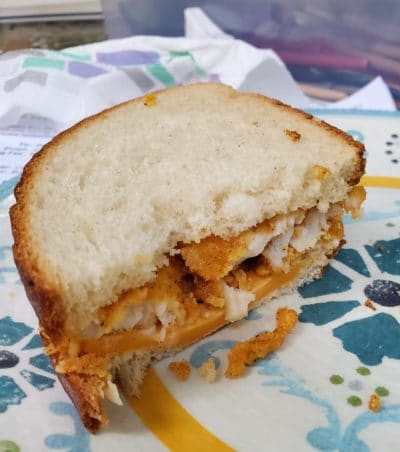 Bluegill are delicious. Cajun breaded, deep fried bluegill on rye with cheddar cheese and a squeeze of lemon. Yum yum!