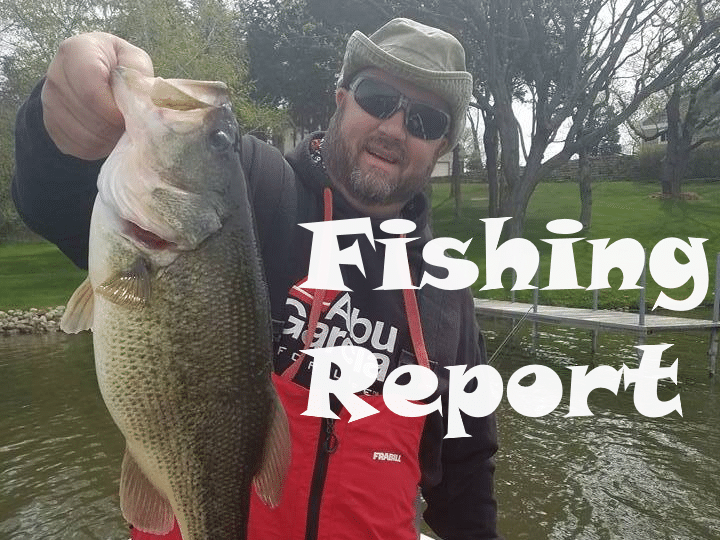 There is a population of the largemouth bass that always spawn earlier than the rest in the secluded shallow weedy bays that border the lake (Beyer’s Cove, Dartford Mill pond, or the “Slop” under the Hwy A and K inlet bridges). We found a population of bass moving into one of those areas a week ago (while fun fishing), and that area still had bass coming and going this week.  (Most of the main lake bass population was still in prespawn. These were one of the earlier waves of fish coming shallow)

We focused on an area that had a very nice population of bass.  We found the bass around 1 PM.  The weeds in this were different than the surrounding area and the water quality was fantastic.  I caught 2, 4+lb prespawn females within minutes of each other what slammed a swim jig.  We also had a bunch of blow ups on frogs.  There were a ton of other bass in the area. Only some on beds. We pulled away and left the area alone to give it several hours to rest before league started (5:30).

We left and fished a few other areas. We decided focused on that 1st area during league. We felt it had the best population we had found and had the size to do well.  Things didn’t plan out.

Those larger females never bit/hit.  The swim jig bite seemed to go away.  But the frog bite picked up.  I had easily 20-30 blowups. On a few occasions, I would swing and miss pulling my frog a few feet, and they would slam it a second time.  But I only got my hook into only 1 fish on a frog (1 1/2″ male).  Didn’t matter if I bent the hooks up (to increase hooking %), or paused longer to set the hook, or set the hook earlier, or let them swim with it a second, or downsized my frog, change colors, etc.  It was miss… after miss… after miss.

The bite was consistent. I found a pattern of what type of holes/pockets they were located in. So much so that by the last hour of league I was pretty much able to call my bites.  My hooks were sharp… still on several occasions I felt the weight of the fish and then felt the bait pull out of the basses mouth.  Very frustrating.  I like to think I’m a pretty good frog fisherman (it’s one of my favorite bites)… and this was one of the most frustrating times in recent memory. At several points I was ready to just throw my rod into the water.

As the clock ticked down to the final seconds and we were on the way out, I got my hooks into a nice fat 3lb male (swim jig) to get our 2 fish limit.  We finished with a pretty poor showing of 4.8lbs for 2 fish.  The top team had over 9 lbs for 2 fish, 2nd place was over 7 lbs. Most teams were in the 6 lb range.

I feel we were in a productive area, but just didn’t execute.  It was my first time frogging this year, so maybe I was twitchy. If I had today off, I’d go back to the same area and see if I could recreate the bite and spend more time tweaking what I was doing until I figured out what I missed. Then if that still didn’t pan out, I would head back to the main lake to find some staging fish.

Obsessed with fishing since a child. Vince loves to share his knowledge of the sport, while helping encourage selective harvest and protection of the resource. He shares fishing reports, tips, tricks, and more during his never ending quest to be a better fisherman. PRACTICE CPR: Catch. Picture. Release.
Posted in Big Green Lake, WI