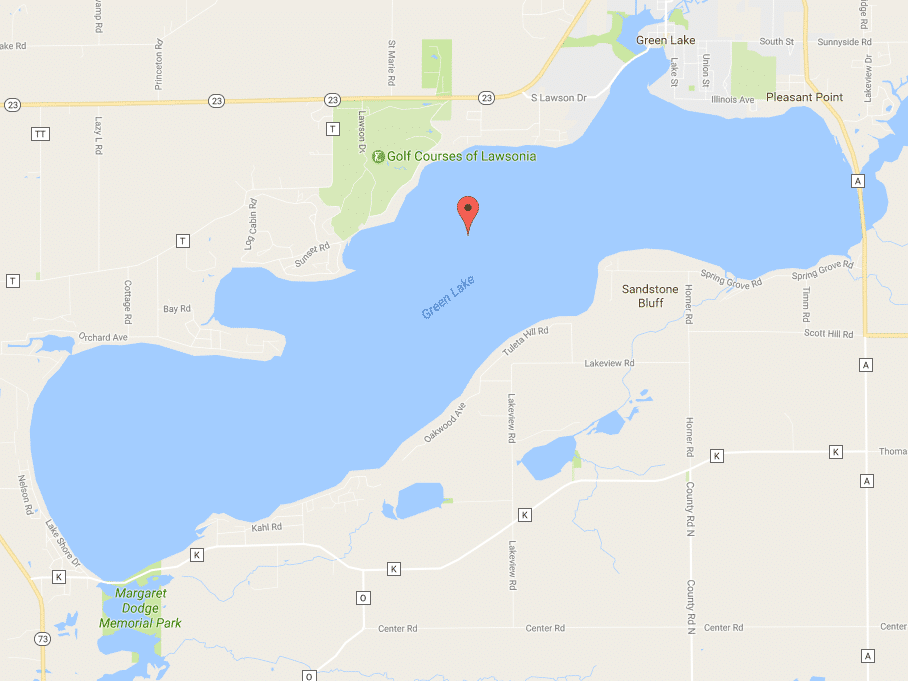 I love fall fishing… except during or right after the Fall Turnover (Learn about the fall turnover here or here). The turnover is when the warmer surface water cools off (which makes the water heavier), which causes it to sink and mix with the cooler water below the thermocline. Wind encourages the mixing and eventually the thermocline thins and disappears as the water mixes.  This causes several things:

Most of the time a lake turnover will happen as the water temp nears 40 degrees. Sometimes, especially after lots of cooler weather, cold rain, and constant higher winds a lake can undergo a mini-turnover. When this happens the influx of colder water from the rain run-off, which recreates currents as well, and in-combination with consistent high winds over a period of days can cause the the waters layers to mix prematurely. Think of the lake as in a mini-washing machine.  The water layers get mixed for a while until the weather conditions stabilize and the water has time to re-stratify.

I ran into this yesterday on Big Green Lake.  After a few weeks of cooler weather, cold rain, and winds we had a small Indian summer pattern of a few days of high 60’s, low 70’s weather.  So I took a day off of work to go fish. Conditions like unseasonable warm weather in fall can be dynamite!  Little did I know that the previous weather patterns had pushed the lake into a mini-turnover.

Normally in the fall you can pretty easily find bait balls or schools of fish with your electronics. The weeds have died back and the fish are schooling up ahead of winter.  I marked only a handful of fish on my electronics (all 30+ feet), and only saw 1 single (small) bait cloud.  Some area’s that were sheltered from the winds (10+mph) had very clear water with visibility down to around 15’… but I didn’t see a single fish or any baitfish anywhere….which is never a good sign.  All I caught was one small perch (6″).  Never even got another bite.

I didn’t fish the entire lake.  I was by myself and there were some big waves where they wind was blowing into on the northern shoreline. I tried that side for only a bit, took a wave crashing over my bow… and I headed for safer and calmer waters. (Safety first). I spent most of my time on the water along the less windy shores looking for fish and it was like a ghost town.  There could have been a ton of fish along the northern shorelines, but I’ll never know for safety reasons. I find it very unlikely that all of the fish moved to just once side of a very larger lake.

It took me a bit to realize what was going on… it was too early for  the fall turnover. Then the light-bulb clicked on, I didn’t recall seeing a thermocline on my electronics when I was motoring cruising around.     I ran back out over the deeper water (150’+) and sure enough… no thermocline anywhere. A sure sign that the lake has turned over (or at lease was in a mini-turnover).  I’ve never had any luck fishing during or right after a turnover.  If anyone reading this has had a good fishing day during a turnover or right after a lake turns over let me know. I would have been better off moving to a different lake that was either already done with the turnover or was pre-turnover.

I doubt this was the full fall turnover, but more likely a mini-turnover due to the weather conditions over the last few weeks.  I suspect that with stable weather on the way that the water will re-stratify soon and the full turnover is still a few weeks ahead on Big Green (sooner for smaller lakes).

Scenarios like this is why I started to record fishing reports.  In future years, when I find similar conditions I can refer back to this report, learn from the past, and stop wasting time on an unproductive body of water or target much deeper than normal and just grind it out.

Big Green will be back to traditional fall patterns in about a week or so. I’m hoping for at least one more trip before ice fishing season is upon us.

Obsessed with fishing since a child. Vince loves to share his knowledge of the sport, while helping encourage selective harvest and protection of the resource. He shares fishing reports, tips, tricks, and more during his never ending quest to be a better fisherman. PRACTICE CPR: Catch. Picture. Release.
Posted in Big Green Lake, WI, Fishing Reports